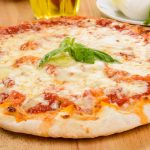 On a wooden or marble work surface, shape the flour into a well. Place the yeast, salt and warm water in the center. Be careful not to let the salt come in contact with the yeast.

Knead the dough vigorously with your hands for 15-20 minutes, or in a mixer, until the dough is soft and smooth.

Once you have the right consistency, adding a bit of water or flour if necessary, shape the dough into a ball. Cover with a plastic bowl so that the dough is protected from the air. Let rise for 3 or 4 hours at room temperature for about an hour in a warm place.

Once the dough will be doubled in volume, ricavatene 6 loaves, modellateli in spherical shapes, cover with a sheet of plastic wrap and let them rise at room temperature for a couple of hours or in a warm place for about 45 minutes.

As soon as the loaves have doubled in volume, prepare the tomato sauce and place it in a bowl. Add a pinch of salt and 1/3 of the olive oil.

Knead the dough, then flattening them using your fingers.

Use a ladle or a spoon to spread a good amount of tomato sauce on the pizza. Then, cover with mozzarella, torn into pieces. Garnish with a couple leaves of basil and bake in a 480° F oven for 5 or 6 minutes.

Once ready, remove the pizza from the oven. Garnish with more basil and a drizzle of oil. Serve immediately. 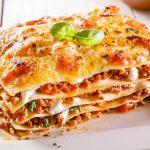 In a small casserole, gently fry the chopped lard with the oil and the chopped vegetables. Add the minced meat. Meanwhile hard-boil the eggs.

Brown the mixture for a few minutes, pour the wine over it, sprinkle with the marjoram and season with salt e pepper.

When the wine has evaporated, mix in a small amount of flour and leave to cook for some minutes. Then add the tomatoes and finish cooking for about 1 hour, if necessary thinning with a little stock.

While the sauce is cooking, make the fresh pasta. Roll the dough out into a very thin sheet and cut it into 4×6 inches rectangles. Cook the rectangles in abundant boiling salted water. Once they are cooked, drain them and cool them immediately in cold water.

In a buttered oven dish, arrange the pasta in layers, dressing each layer with the meat sauce.

On top of the sauce, uniformly distribute the sausage (previously fried in garlic and parsley) cut into in small pieces, the ricotta, the hard-boiled eggs in wedges or slices and the mozzarella in cubes.

Close off with a sheet of pasta and sprinkle grated Parmesan on top. Put the dish into a moderate oven (350°F) for around 40 minutes. Once it is cooked, well-browned on the surface, leave it to rest before serving. 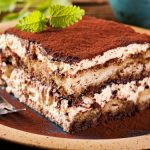 Separate the yolks from the whites by breaking the eggs one at a time and pouring the egg white into a glass while sliding the red from one shell to another.

Beat the egg yolks with the sugar for a couple of minutes with a whisk or with a mixer, until you get a swollen and frothy compound, to which you will add the mascarpone, mixing well until obtaining a soft and homogeneous cream.

Whisk, then with an electric or hand whisk, 2 of the egg whites with the snow still and, once they are well swollen, pour them in the mascarpone and egg mixture prepared previously.
Mix everything by mixing it very gently with a movement of the spoon that proceeds from the bottom to the top.

Once the mascarpone cream is ready, you can move on to preparing your tiramisu.

Tiramisu can be presented in different ways by preparing it either in a single mold or in single portions.

In the first case, equip yourself with a not too large baking tray or cake pan and place the ladyfingers one at a time on the bottom, after immersing them in the coffee for no more than a second. Once you have covered the entire surface of the pan with the ladyfingers, cover them with half the mascarpone cream, leveling it well with a spatula and sprinkle everything with the cocoa powder. Then place a new layer of ladyfingers on top of the cream, dipped as before in the coffee and, once all the available space is occupied, cover them with the remaining cream, which you will have to level again, and sprinkle abundantly with cocoa powder.

Then leave to rest in the fridge for at least 3 hours and serve cold.

If you want to serve tiramisu already portioned, you can use cups or martini glasses.

In this case, use 4 ladyfingers for each portion, dipping them one by one for a second in the coffee and placing them vertically in the cup with one end touching the bottom of the glass and the other coming out.
Then fill the cup with a few spoonfuls of mascarpone cream making it distribute well throughout the cup giving a few taps on the base of the glass with the palm of your hand.

Then sprinkle the cup with abundant cocoa powder and let it harden in the fridge for 2-3 hours before serving. 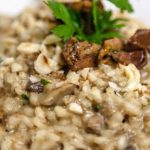 In a saucepan, warm the broth over low heat.

Warm 2 tablespoons olive oil in a large saucepan over medium-high heat. Stir in the mushrooms, and cook until soft, about 3 minutes. Remove mushrooms and their liquid, and set aside.

Add 1 tablespoon olive oil to skillet, and stir in the shallots. Cook 1 minute. Add rice, stirring to coat with oil, about 2 minutes. When the rice has taken on a pale, golden color, pour in wine, stirring constantly until the wine is fully absorbed. Add 1/2 cup broth to the rice, and stir until the broth is absorbed. Continue adding broth 1/2 cup at a time, stirring continuously, until the liquid is absorbed and the rice is al dente, about 15 to 20 minutes.

Remove from heat, and stir in mushrooms with their liquid, butter, chives, and parmesan. Season with salt and pepper to taste. 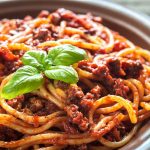 Add the spaghetti to the sauce and toss over low heat until combined. Transfer to bowls and pass the cheese at the table. 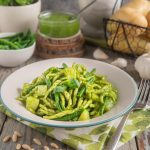 Clean the green beans and cut into pieces. Peal the potatoes, cut in cubes and set aside, soak in cold water.

Wash accurately the basil leaves and leave them to dry. Hull the pine nuts, grate the cheese. Put the basil, the cheese, the extra virgin olive oil, the pine nuts, the clove of garlic and a pinch of salt in a blender.  Blend well to obtain a homogeneous mixture. Put aside.

Cook the Trofie in abundant boiling water lightly salted together with the green beans and the potatoes. Drain the pasta al dente and dress with the pesto. To better toss the dressing, add some of the cooking water. 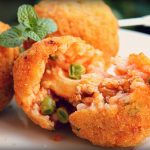 Boil the rice in a quart of boiling salted water with a pinch of saffron. Cook over medium heat for about 15 minutes, stirring continuously until all of the water has been absorbed.

Remove from the heat and, in a large bowl, mix in with the beaten eggs, the butter and the Parmigiano Reggiano cheese.

Allow to cool and meanwhile prepare stuffing.
In a saucepan over medium heat, add oil and meat sauce: mix it with the peas, salt and pepper and cook until sauce has reduced down by over half and is fairly dry.

With moist, but not wet hands, form a 1 to 1½-inch ball of the rice mixture in the palm of one hand, and using the other thumb, make a depression as deep as the first joint of your thumb.

Place some of the meat mixture in the hole and cover with rice.
When all the balls are formed roll them in flour, then dip them in the beaten egg, followed by the breadcrumbs.

Season with salt and serve hot. 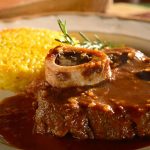 Use a small knife to make incisions along the edge of the veal shanks to make sure that they do not change shrink during cooking. Then cover evenly in flour and season with salt and pepper.

Place a large frying pan over medium heat. Add the butter and, once melted, add the veal. Once browned on both sides, remove the veal and set aside.
Add sliced onion to the pan you cooked the veal in. Once golden, return the veal to the pan and add white wine.

As soon as the sine has cooked off, cover the veal shanks in the meat broth and cook , covered, for an hour and a half.

In the meantime, prepare the gremolata. Finely chop peeled garlic, parsley, lemon peel and rosemary. Mix everything together.
Before serving cover the veal shanks in the gremolata mixture. 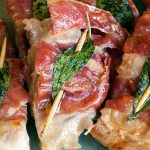 Cut the slices of veal and season with salt and pepper.

Place a slice of ham and a sage leaf, after washing and drying it, into each slice.
Roll up and close with a toothpick.

Place a large saucepan on the cooker so that it can contain all the slices, melt the butter, add the saltimbocca and brown for a few minutes on each side.

Dilute the cooking liquid with dry Marsala wine, evaporate for a few minutes.

Add a little veal broth and season to taste.

Arrange the saltimbocca on a serving dish and cover with some of their own gravy. 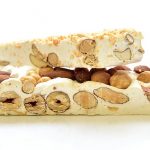 Melt the honey in a bain-marie, and while it is still warm add the egg whites whipped to form stiff peaks.

Put the pan back onto the heat and leave the mixture to cook, again in the bain-marie, for two hours strring with a large wooden spoon, until it has become dense and shiny.

Meanwhile, prepare a syrup by boiling the sugar with the water for around twenty minutes: it is ready as soon as it begins to form “threads”: Add it, while still boiling, to the honey mixture which is still on the heat: Leave to cook for a few more minutes and at the end, add the vanilla, chopped mandarin peel and the peeled, oven-toasted almonds.

Lay the wafer sheets out on a table, position the wooden grating and arrange the filling with your hands wet with cold water to avoid being scorched or sticking. Flatten and level off well. Then, using a knife, gently detach the Torrone cooled by the wooden edges of the grating, cover with another wafer sheet and press down well.

To prepare this excellent homemade gelato, first heat the milk with the vanilla bean and lemon peel.

Open the vanilla bean lengthwise and remove the small beans inside by scraping away with a knife, then add to the milk. If you like a strong vanilla flavor, add the entire vanilla pod; otherwise, save the pod for another recipe.

Next, add the lemon peel to the milk.

Heat the milk after the lemon and vanilla have been added.

In the meantime, mix and prepare the other ingredients.

Add to the sugar the dextrose and the powdered milk and combine well. In a separate bowl, mix together the egg yolks with the fresh cream.

Once the milk is hot, add the sugar to the powdered milk and heat to 185° F, whisking constantly. Check the temperature using a kitchen thermometor.
Once the milk has reached 185° F, add the eggs and cream, continuing to whisk constantly. Leave on the flame for about ten seconds in order to pasteurize it and eliminate bacteria.

Quickly cool the mixture. Pour the mix into a container, then place the container in a cold water bath with ice.

Once ready, take the gelato out of the machine and serve this delicious, homemade treat.